Made possible by The Ludwig Family. 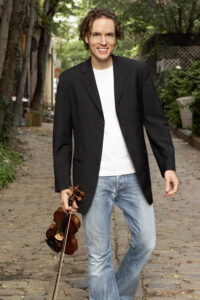 Tim Fain has been entertaining SummerFest patrons since 2014. With repertoire ranging widely from Beethoven to Aaron Jay Kernis, the Los Angeles Times noted that his career “is based, in part, on new music and new ways of thinking about classical music.” His recordings include River of Light (Naxos), which showcases modern virtuosic short works for violin and piano by living American composers;
The Concerto Project Vol. IV with the Hague Philharmonic; Tim Fain Plays Philip Glass (Orange Mountain Music); and he can be heard on soundtracks for Black Swan, Moonlight, 12 Years a Slave and Bee Season.

Tim’s multimedia evening, Portals, premiered to sold-out audiences in New York, Los Angeles and at its Midwestern premiere at Omaha’s KANEKO. The centerpiece of the presentation is Partita for Solo Violin, a work written especially for him by Philip Glass. The work features collaborations with Benjamin Millepied, Leonard Cohen and Nicholas Britell, among others. A second iteration of Portals, in collaboration with pianist Simone Dinnerstein, is underway featuring a newly commissioned work by Bryce Dessner.

A native of Santa Monica, California, Tim Fain is a graduate of The Curtis Institute of Music in Philadelphia, where he studied with Victor Danchenko; and The Juilliard School, where he worked with Robert Mann. Launching his career with Young Concert Artists and an Avery Fisher Career Grant, he went on to electrify audiences at Lincoln Center’s Mostly Mozart Festival, with the Orchestra of St. Luke’s, and most recently with the American Composers Orchestra at Carnegie Hall. He has also appeared with the Mexico City, Tucson, Oxford (UK), and Cincinnati Chamber symphonies; Brooklyn, Buffalo and Hague philharmonics; the National Orchestra of Spain; and the Curtis Symphony Orchestra in a special performance at Philadelphia’s Kimmel Center. He was the featured soloist with the Philip Glass Ensemble at Carnegie Hall in a concert version of Einstein on the Beach.