Thursday, July 15 at 7:30pm ~ A Potpourri of Pops with Rachel Tyler

Made possible by Kent & Bev Hellman.

The crowd-pleasing pops concert will showcase our featured vocalist in her musical element, singing hits from stage and screen, accompanied by the SummerFest musicians. The orchestra will get their turn, too, performing arrangements of Danzón No. 2 by Arturo Márquez and Leroy Anderson’s Bugler’s Holiday. 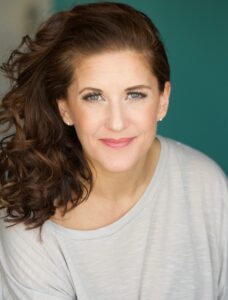 Rachel Tyler began her career as a featured singer for a small band singing in an after hours nightclub, during which time she became involved with several local amateur dramatic companies. She won a three-year scholarship at the Guildford School of Acting and, immediately upon graduating, was whisked away to the European Tour of The Rocky Horror Show. She also performed in London’s West End hit shows Smokey Joe’s Café and Miss Saigon. After some leading roles in several Off Broadway productions in New York, she became lead vocalist for Crystal Cruises. After two years of non-stop performing, Rachel considers herself very lucky to have seen most of this wonderful world, including Antarctica, all while doing what she loves.

Rachel joined the cast of Mamma Mia on the Broadway National Tour. She spent two and a half years with the company, originally in the ensemble and very quickly moving on to play the lead role of Tanya, whom she was fortunate to portray on the 63rd Annual Tony Awards at Radio City Music Hall. Las Vegas starring roles followed, in Steve Wynn’s Showstoppers and Le Reve, The Dream.

Although she loves the thrill of a big stage musical, Rachel enjoys the intimacy of a cabaret lounge, a good piano and a great torch song. She has most recently been performing her latest cabaret, Broadway & Beyond, which has been very well received. She is a founding member of the all-female singing group, Lady Luck, that is currently booking all over the world. She has worked alongside acclaimed artists such as Lorna Luft, Alan Menken, Marguerite Derricks (The Marvelous Mrs. Maisel), John Bucchino and Stephen Schwartz (Wicked), to name a few. She has also recently joined the faculty of The American Musical and Dramatic Academy, Los Angeles, as part of their Musical Theatre division.